Home of the Day Sailer Association

Note: this guide depicts rigging for a Day Sailer I, though there should be many similarities with other Day Sailers

When setting up the Lollipop for racing from a completely stock 1966 Day Sailer, the goal was to keep the boat as simple as possible and still be raceable. After racing this boat for 7 years in all conditions, except ocean waves, with a variety of crews from 9 year olds, to friends from work, the systems described have worked very well and have been very competitive. Wherever an improvement is comtemplated, I always weigh the sacrifice in comfort and "daysail-ability" versus the possible racing benefits. 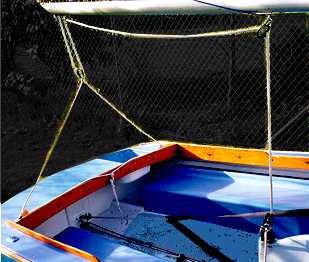 Mainsheet cleat is a Harken Hexarachet placed on the original location. When racing this can create an awkward angle, but it keeps the mainsheet clear of jib and spinnaker sheets for fewer tangles.

The traveler is a fixed triangle of line, using the stock blocks on the rear deck and a hook inside the coaming to hold the knot where the two ends come together. The center block is about 22" above the deck, always centered when going upwind. When setting up the height for this block, some trial and error can improve performance.

When sailing in wind about 3-5 knots, no vang tension, the main sheet should only pull the boom in and out, not down, until the boom is about 9-12" off center, then the boom should be pulled down and in equally, with added sheet tension. When there is enough wind to need more leech tension, the boom vang is used to keep the leech where you want it and the main sheet is used for in-out boom position only. Tacking requires only mainsheet adjustments.

Downwind, when I remember, the traveler knot is released from the hook to shorten the amount of mainsheet needed to broad reach or run. Also shown in this picture is my spinnaker halyard going to the transom and then forward to a floor mounted cleat and bullseye at the end of the centerboard trunk. 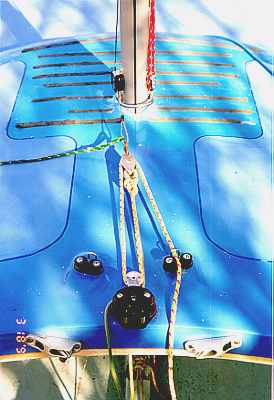 This is the 3:1 Jib halyard tensioner. I use jibs with a luff rope in them instead of a wire. That means the halyard becomes the jib cunningham for luff adjustments. The cleat in the center is for the boom vang. The empty cleat to the left is for the main cunningham.

The two gray Clam cleats on the aft edge of the cuddy are for the barber in-haulers. 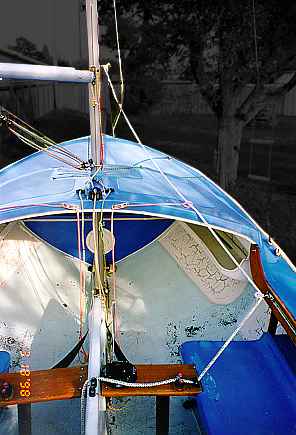 This shows everything rigged. At the bottom is the jib sheet running from the seat cleat w/bullseye to stock fairlead on the inside edge of the coaming (hasn't been adjusted in three years), then through the barber hauler(pink line at edge of cuddy.

The area on top of the cuddy looks a little complex, but with a little thought, everything stays untangled and runs free.

Notice entire cuddy is open and available for ice chests, sleepy children or the laundry basket we use for spinnaker storage. On the top edge of the centerboard trunk you can see the two mini cleats we use for the spinnaker sheets. 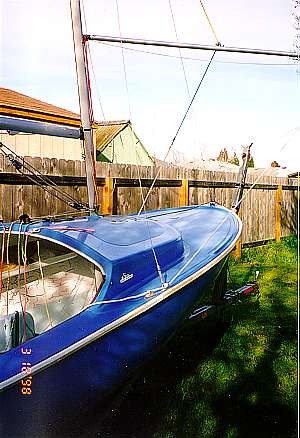 The topping lift goes to a sheeve about 2’ above the spreaders. (By the way, my spreaders are 21" long and free swinging). On my previous mast, the topping lift was external and worked much better. The topping lift then goes below deck to the base of the mast, thru a block and then directly to a cam cleat mounted under the starboard CB seat (shown on pictures 3 & 6).

The pole down haul is about 2' of 1/4" bungee cord (the good stuff) and the rest is 3/16" line. This goes through a hole in the forward edge of the cuddy and then aft to a clam cleat mounted to the inside roof of the cuddy under the vang cleat. When the pole is moved fore and aft, the bungee cord absorbs the length differential created by having the bottom of the down guy so far forward of the mast. The advantage here, is, the forward down guy helps pull the pole toward the corner of the spinnaker when it sometimes slips aft.

Also shown is the spinnaker sheet going under the reaching hook to the guy cleat used by the adult crews strong enough to trim from this position. The "hook" is unique. It is a Harken becket roller, thru-bolted to the shroud attachment in lieu of a clevis pin. Whenever the pole is forward of about 45 degrees the line stays under the roller. When the pole is pulled further aft, it does pop out of its own accord, but hooking the guy is not necessary when the pole is carried that far aft. Also an advantage is when jibing, this "hook" auto releases. No more trips to leeward to release a forgotten line. The hook can also be seen in picture 3.

Looking up to the boom, the 12:1 vang can be seen. It is a 6:1 using triple blocks and then doubled with a single cascade. Just forward of the vang, the 3:1 internal outhaul cleat is shown. A useful trick to keep the outhaul tail out of the crews hair (literally) is to use a piece of 3\16 bungee cord tied to the end of the line and out to the clew. This sucks up the slack and also can be used to pull the clew in when trying to release it. (some of this cord can be seen in #1)

Spinnaker Halyard at Mast Base 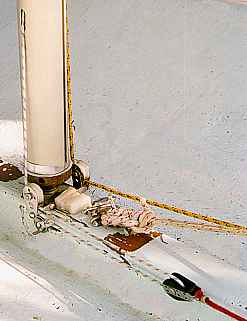 This shows the 1:2 (reverse) spinnaker halyard. The red line goes to the transom and then forward to a cleat and bullseye shown on pictures 1 & 6. This system pulls the chute up 2' for every 1' pulled. The yellow line on the other side of the mast is the topping lift. The white line with many knots is the forward attachment of the hiking straps. 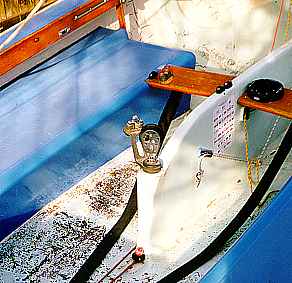 Well, there it is, everything that makes the Lollipop go. There are certainly ways this rigging can be improved for racing, or things that can be further simplified for daysailing. But, for our family, we like the G.S. Lollipop just the way she is.

Forum posts and photos are copyrighted by their respective authors. Everything else copyright © 2015 by the Day Sailer Association. Contact webmaster.